Anyone have a "beef" with Phil Mickleson and his brain explosion in the Open? 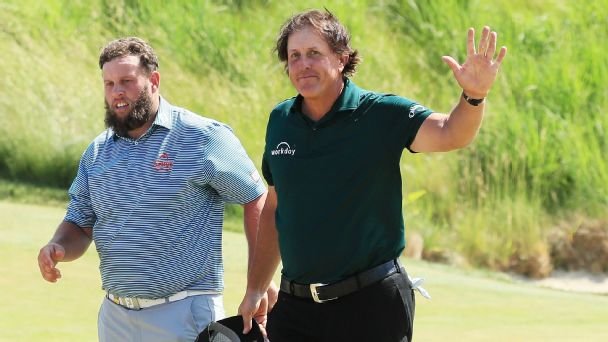 After lengthy debate at our local golf club the editor has sought out long time rules officianado Barry Rhodes Author and Director at the  "Rhodes Rules School"
As often as we may debate it for one point of view or the other, Mickleson in the third round of the tournament literally had a brain snap and did what some of us in the golfling world may have thought about doing!!

On a course that was not playing particularly fairly from the morning to the afternoon, "This has been stated by many of the tour players and admitted by the USGA" case in point was Daniel Berger with his low round 66 of the tournament played in the morning, in the afternoon when eventual winner Brookes Keopka had to play exceptional golf to shoot 72, add to that world class golfer Rickie Fowler only able to achieve an 84 in the afternoon after a round one 73 and round two 69.

A lot have people have waded in to critisize Phil and demand he should have been disqualified but as Barry points out in the following Rules Decision Phil was entitled to make the shot he made.

"I agree 100% with the USGA ruling; they had no option as the Rules stand. This is their reasoning."
"During play of the 13th hole Phil Mickelson made a stroke on the putting green at the time his ball was moving. As a result, he incurred a two stroke penalty for a breach of Rule 14-5. His score for the hole was 10."

Per the USGA's website, Rule 14-5, "Playing a moving ball," says that a player "must not make a stroke at his ball while it is moving." This is different than Rule 1-2, which covers a ball purposely deflected or stopped by player, partner or caddie, and also is a two-stroke penalty.

John Bodenhammer, the USGA's senior managing director, championships and governance, spoke to the media while Mickelson was still completing his round:

"We've recently spoken to Phil, and he understands the ruling and has accepted it."

When pressed about Rule 1-2, Bodenhammer had this to say:

"Our Rules Committee mobilized quickly and unanimously decided this situation is specifically and explicitly covered under Rule 14-5.

"To go to Rule 1-2—Phil didn't purposely deflect or stop the ball, which is talked about in the reference under Rule 14-5, if you look at it. 14-5 explicitly covers a player making a stroke at a moving ball, and so we operated under that rule."
The key point is that Mickelson made a stroke (the forward movement of his club) with the intent of striking it to the hole. Rule 1-2 that others have been confused by, relates to a player deflecting or stopping a ball, e.g. if they chipped up a steep slope and saw that the ball might roll back down the slope into a water hazard, so they either stopped the ball or knocked tit to the side.

Interestingly, the ruling would be the same under the new Rules of Golf - 2019